Hear from a Peer: How to Start Tackling Tough Organizing Tasks

Get advice from others on how they keep on top of the workload.

Reorganizing the office can be satisfying and rewarding. But figuring out where to begin may seem overwhelming. We’ve gathered some ideas by asking office managers in a Staples survey to tell us: What is the first step you’re taking to tackle organization-related tasks ?

Trish, office administrator: “First, I’ll take some time to list the things I’d like to get accomplished for the office. Then, I’ll break the list down into things that will directly affect the company — for example, by improving productivity or saving money — and things that would be nice to get done.

For example, one of the items on my list last year was to get approval to start using a grocery delivery service for refrigerated creamers, milk and other things we might need at an hour’s notice if the CEO asks. Since taking that step would save the company time and expense, I worked on a proposal for my manager so we could start as soon as possible.

My list also included reorganizing the kitchen — but since that was mainly for my sanity, I noted it as something I would get to eventually.”

Trish will revisit the list monthly and do a more thorough assessment around midyear review time. “I’ll see how my plans have affected the company and decide if they are worth continuing,” she says. “It’s also nice to have something positive to add to my performance review.”

We asked respondents of the Staples survey: 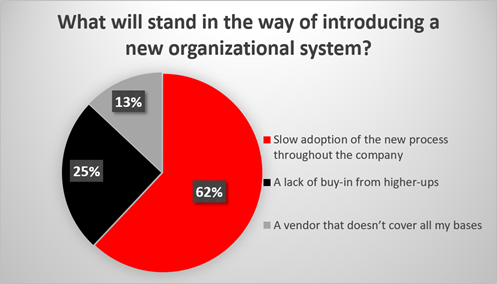 Good ideas for reorganizing won’t always come to fruition — at least not quickly. Nearly two-thirds of your peers said slow implementation of new processes will make it hard to introduce new systems.

Lacey, administrative assistant: “Lately I’ve been purging documents and other things that we haven’t touched or thought about over the past year. Just a few weeks ago, I decided to clean out the file folders attached to my desk, and found packing slips and sign-in sheets from 2007! I was able to get rid of enough items to free up one of the drawers and add my own filing folders to the system.”

Lacey is also focusing on the files on her computer and archiving those she won’t need this year. “I typically hate to delete items from my computer, but the ‘archive’ folder gives me peace of mind and makes things look prettier,” she says.

Find supplies that are a joy to use — sleek, innovative and reliable.