Virtual Meeting Annoyances and How to Stop Them

Staples conducted a survey to learn about virtual meeting etiquette and which behaviors are the most annoying. Read on to find out how to avoid these issues!

COVID-19 has prompted a widespread shift to remote work, and therefore a soaring number of virtual meetings.

The transition from in-person to remote meetings requires participants to find creative ways to connect and collaborate with coworkers. And while there are benefits to virtual meetings, there are also challenges to overcome.

Participants aren’t able to rely on nonverbal cues as easily in a virtual meeting as they would be in a face-to-face meeting, which can lead to miscommunication. Additionally, anyone who regularly attends virtual meetings can attest that there are annoyances and tedious behaviors -- like frozen screens or trying to talk when muted -- that can distract from the overall effectiveness of a meeting.

Breaking Down the Most Annoying Virtual Meeting Behaviors

Survey respondents were asked to select what they considered to be the most annoying virtual meeting behavior in four categories: appearance, attention, sound, and technology.

Many remote work best practices include a suggestion to dress as if you’re going into the office. Surprisingly, nonprofessional attire doesn’t bother respondents as much as video backgrounds, with only 14.5% of respondents listing attire as the most annoying. A more casual wardrobe while working from home appears to be fine with the majority.

Whether it’s multitasking, texting off-screen, or simply not paying attention, the top attention-based annoyances show that fellow meeting participants watch your behavior even when you think they aren’t. Visibly not paying attention was the top attention-based annoyance for 27.5% of respondents, followed closely by multitasking or doing other work during the meeting.

Removing distractions can help cut down on these types of annoyances taking place. Practicing active listening while also incorporating simple cues, like a head nod, to your meeting routine can help your team know you’re engaged. Additionally, stashing your phone and closing browser tabs will allow you to better focus on the virtual meeting.

Sound-based annoyances may be some of the most frequently occurring (how many times have you heard, “I think you’re muted” in the past six months?) Not using the mute button properly was the top annoyance for nearly one in three respondents.

Using an external microphone or headset will go even further in ensuring lessened background noise. And while some background noise is unavoidable, cut down on the sounds you can control by turning off chat notifications during your meetings. Details like carpeting in the room can also affect the sound of your meeting, so consider putting a rug on your wood floor to reduce the chance of possible echoing.

Poor internet connectivity holds the position of the top technology-based annoyance, with nearly half of respondents considering it to be most annoying. Many of the technology annoyances are out of a participant’s control when compared to the other categories (who can say they’ve never suffered from a spotty internet connection?). In fact, the majority of top answers fall into things somewhat out of participants’ control, though there are still actionable ways to avoid them.

Poor internet connectivity, video freezing, and mic issues accounted for about 85% of respondents’ top annoyances. And while internet connectivity can fall out of your control, consider workarounds for troubleshooting when having connection issues. Move closer to your WiFi router, add a secondary WiFi booster if necessary, and have a contingency plan set in place like dialing in by phone if you can't connect via laptop. It’s useful to keep your coworkers’ cell phone numbers on hand to text for dial-in information in case you’re unable to connect or access the meeting details.

Next, survey respondents reported how often they observe the annoying behaviors for each category. The behavior considered to be the most annoying was also the most observed in every category.

Your fellow meeting participants likely agree with you on the mannerisms and behaviors that are most annoying. Consider a plan to avoid doing the things that annoy you most in meetings to increase the overall effectiveness of the meeting for everyone.

Other Things That Annoy People in Virtual Meetings

A study about virtual meeting pet peeves wouldn’t be complete without touching on the common phrases used in virtual meetings that annoy people most. “Can you hear me?” is considered the most annoying phrase in meetings by the largest percentage of respondents, nearly one in three.

“I think you’re frozen” is the most annoying phrase for 23% of respondents, while 19.8% reported being most bothered by “Sorry, I didn’t realize I was muted.” These phrases can be the result of some of the most annoying technology and sound behaviors – such as not muting properly and poor internet connectivity. Being more mindful of these pet peeves could result in fewer instances of these common phrases having to be used, which the majority of meeting attendees would welcome. 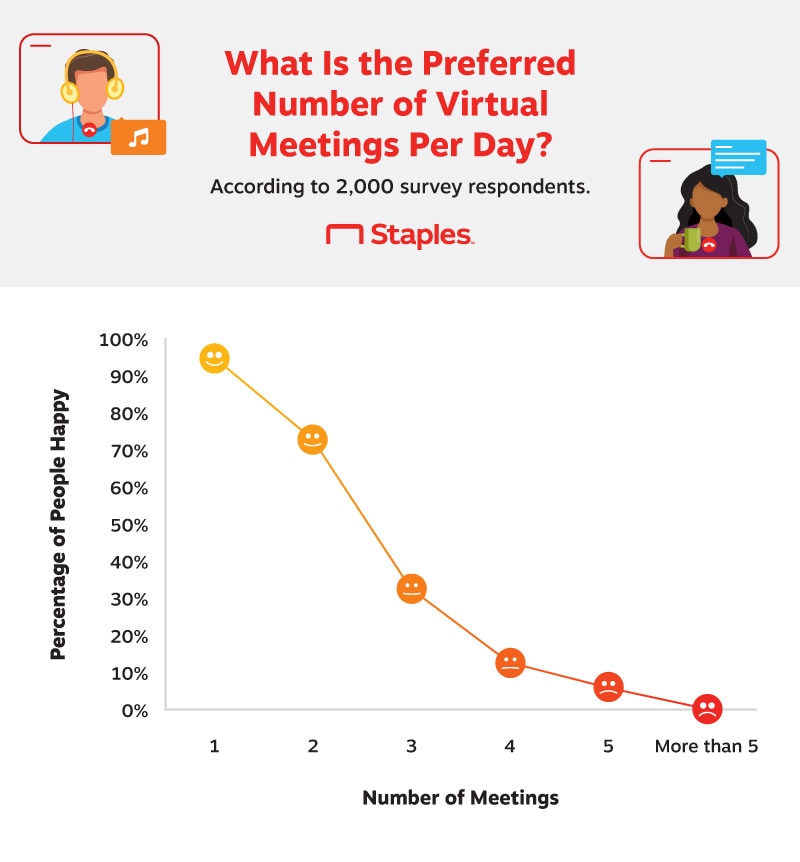 Lessen the annoyance associated with too many meetings. Set an agenda and share it with the team before the meeting to keep things on track and help prevent meetings from going over time. Even going five minutes over schedule is considered annoying for nearly 40% of respondents, so it’s important to be respectful of coworkers’ time. How much time should be allotted for casual conversation in a virtual meeting? According to 40.8% of respondents, three to five minutes is the right amount.

How to Be More Effective in Virtual Meetings

While some aspects of remote work can be out of your control, there are many things that you can do to help remove distractions and increase the effectiveness of your virtual meetings. Try these etiquette tips to avoid virtual meeting annoyances and help your team be more collaborative in this new normal.

Remote Work in a Post-COVID World

Remote work may not be going anywhere anytime soon, even in a post-COVID-19 world, as more workers have grown to value the flexibility that comes along with a remote schedule. In fact, in a recent study on the perks and incentives that motivate employees most in the workplace, Staples found that one in four workers consider remote work a “must-have” perk. A separate study found that over half of employees wish to continue full-time remote work permanently, even after the pandemic.

Since many employees value remote work and virtual meetings will likely be more of a permanent fixture, here are some other best practices to move forward with into the future.